Sponsor's Match | Gallery | Shenfield CC
Would you like to play for SCC?

An enjoyable exciting game of cricket was had at Shenfield between the St Helier's sponsor's side and a Club side with both teams containing a mixture of young and old, players, coaches and parents combining. With retirement after 4 overs of batting, everyone had a chance to pad up at least once, but the Spit total of 187 in 30 overs was largely built around Martin Allen (41), Garry Sapsford (33) and Alex Waltham (33), but many highlights were noted, George Pratt bowling his father Ian (11) was one, and Glenn Ellis run out for a duck another. Everyone from the Pear X1 was given a chance to bowl, before tucking into a generous tea.

In reply the opening Pear of James Borman and Emery got things moving against the opening attack of Alex Waltham and Gary Sapsford (whose bowling underlined his credentials to keep wicket), but the paceless Ian Pratt, Alan Moreton, Glenn Ellis and virtuoso impersonator Alan Vowles (of Ben) bowled good lines to keep matters under control. George Pratt and Tom Ellis moved the Pear total along and then Hibberd Snr (13) was run out, Matt Hibberd (17) totally defeated by Sapsford's even slower slower ball. Rickenback Snr and Jnr, together with Graham Waltham bowled nicely as French (11) and Robinson (15) did a bit until superbly caught by Rob Moreton in the deep, and James Borman had the Pear right up there with the run rate until he was caught in the deep by Sapsford off Vowles. Tom Ellis tried to put his father on crutches when Glenn neglected to use his hands at cover, but shortly afterwards, having raced to 41, and with just 14 more required from 12 balls with the last batsmen at the wicket, he fell to an excellent pick up and throw attempting to return for a second to long leg, by his dad, Glenn, getting his own back with a superb direct hit!

A huge vote of thanks to our very generous sponsor John, his hard working wife Sandra, and everyone who helped make it a super afternoon all around. John, Sandra and their boys are in the photo below. 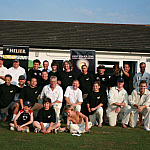 Photo of both teams 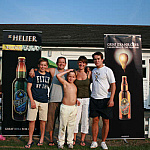